Here’s a wallpaper from the anime & manga series of One Piece, Naruto, and Bleach. If you’re interested in all of them, download it and put it on your desktop.
Info: Size is 1024×768, If you have too many icons on your desktop download the alternative wallpaper.
Note: None of the wallpaper elements, including Naruto, Luffy, Ichigo, Shonen Jump Logo, and Background pics are my work. I just downloaded them from internet and put them together. 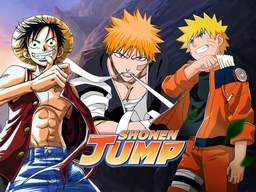 Manga is a black & white Japanese comic, and most anime that would later spawn numerous games are based on them (like Naruto, Bleach, and One Piece). I started watching Naruto anime because of its several games and then it led me to other anime and manga. So I decided to read a chapter of a manga (or watch an episode of an anime) each day of the week. (you can find English translations of them if you search it on Google)
But I didn’t know what manga to read, so I downloaded lots and lots of manga info from wikipedia, read all of their plots, gave them a point of one to five and then decided which one to read.
I summarized all of it in an xls file, so you can also use it to decide which manga to read, they are currently sorted out by Name, but if you have Microsoft Excel you can use the sort option under the Data column to sort them out by whatever you want. It also features a one-line mini story you can read to get a sense of what the manga is about (for more information, search the manga name in wikipedia). Also I encourage you to read the mini-story or the wikipedia article of the manga and give them stars yourself, since people’s tastes differ.
To open an xls file, you need “Microsoft Excel” which is included in Microsoft Office package. However, if you don’t have Office or you don’t want to pay for it, you can either use Excel Viewer or OpenOffice.org, the latter also works under Macintosh and Linux Operating Systems and both are free to download. You can also download the pdf version, but then you won’t be able to sort the manga and you can only view them. Of course, you need Adobe Acrobat reader to view pdf files, but you already know that, right?